Of Stolen Swords and Feet

In a previous post I talked about "swipes"--which is when you're ripping off another comic book, either the drawing or the words or both, and you don't realize it.  However, there is also the intentional "borrow," or nod of the hat, or homage... and I'm going to talk about two of my own, to comic book author/artists who particularly inspired me... Frank Miller and Dave Sim. 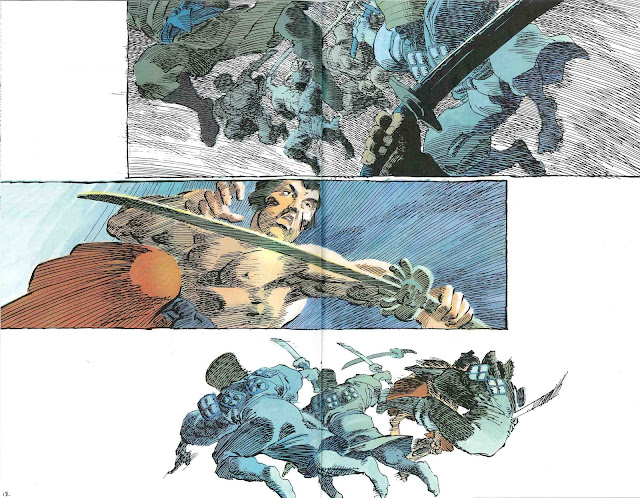 As I've mentioned before, Frank Miller's Ronin hit me like a ton of bricks when I first saw it (and fell in love with it) on the shelf of the Silver Snail comic book store in Toronto at the age of 11.  Miller had previously shown he was great by reinventing the Marvel superhero Daredevil as a gritty noir drama with a) lots of ninjas, b) sexy chicks, and c) lots of violence.  The drawings had been great, but still well within the Jack Kirby/Will Eisner lineage of most North American superhero comics. 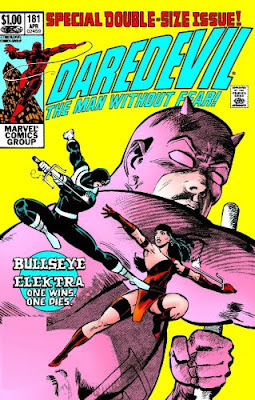 The big one... Daredevil #181, where
Frank Miller allowed Daredevil/Matt
Murdock's love interest Elektra the
Assassin to get skewered on
her own Japanese "sai" weapon

However, with Ronin he was inking his own work for the first time (Klaus Janson had been inking Daredevil beautifully with thick-brushed photographic panache) and I read Frank saying years later that he wasn't sure how to ink his own work. So he was experimenting.  And I responded really well to that experimentation. 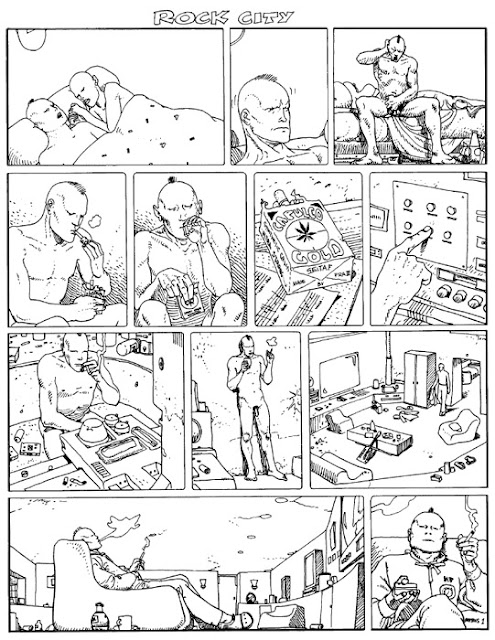 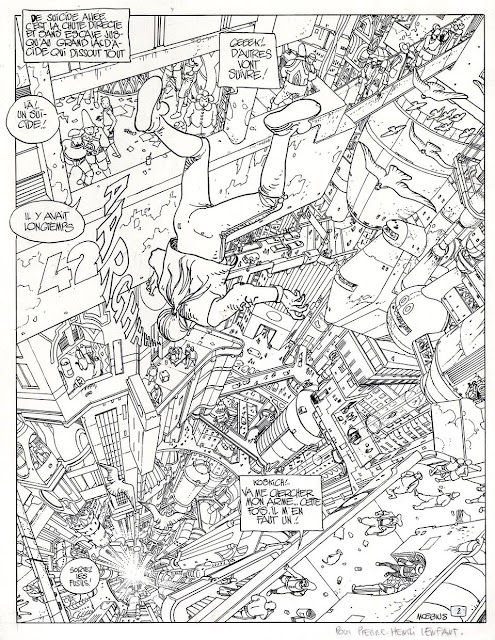 Jodorowsky and Moebius, "The Incal"

...and 2., Kazuo Koike and Goseki Kojima's Lone Wolf and Cub from Japan.  This manga featured long balletic fight sequences with lots of expressive wild crosshatching and very few words, both of which were highly unusual for North American comic books at the time... 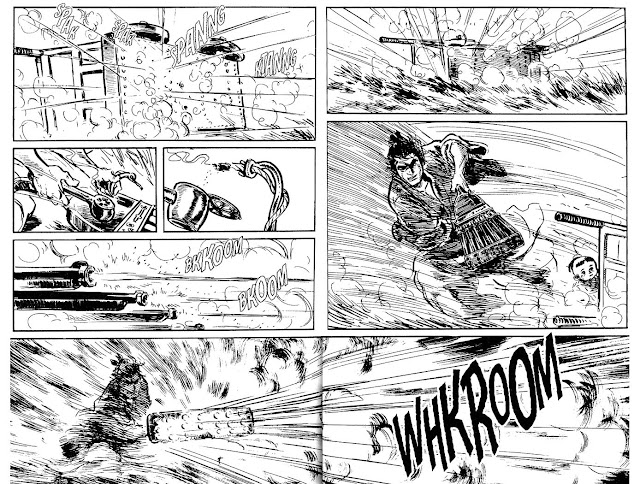 So, the essential ingredients for Ronin were dystopian science fiction (via Moebius) and cynical samurai drama (via Koike and Kojima.)  Of course Frank Miller was already a genius, so it's not like he was really ripping these people off.  He was allowing their language and graphic approach to free him up.

In addition he left his black and white line work, with its exquisite shakiness and crosshatching, open enough for his wife, Lynn Varley, to paint the glorious colours.  (This was not much done at the time, either.)  These "poetry of violence" action sequences were so dramatic that I was often left breathless after reading them.  So, my own homage to Frank Miller's "poetic violence" a-la-Ronin (with tongue only partly in cheek) is found below... 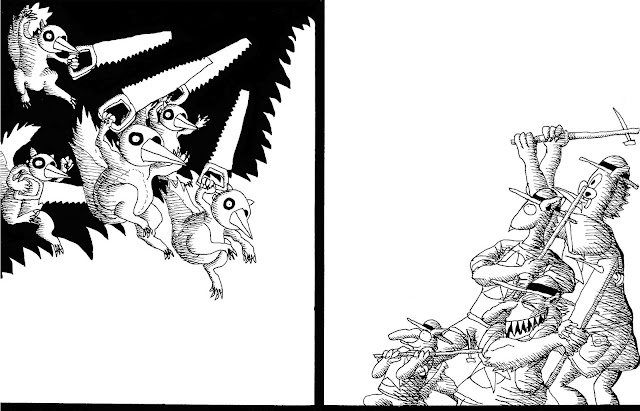 The Penguinistas and Sheriff Raymont Raymont's posse
prepare to battle it out for control of Nexus Island
& The Equivocal Smattering of Miscellaneous
Territories, Etc., from THE CLIFF-Book Two,
"The Inner River", 2012
﻿

And "nod' number two is towards the feet... the feet of Sheriff Raymont Raymont of Nexus Island and the Equivocal Smattering of Miscellaneous Territories, to be exact...

Sherrif Raymont Raymont of Nexus Island and
the Equivocal Smattering of Miscellaneous
Territories, Etc. dives under
the mask of the largest Penguinista
to ensure the continuance of law
and order, from THE CLIFF-Book Two,

Do the Sheriff's feet look familiar?  They should, to anyone who ever read Dave Sim's Cerebus the Aardvark. 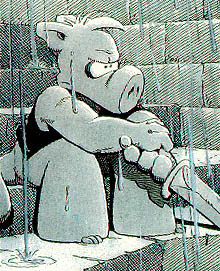 Cerebus sits pensively in the rain,
courtesy of Dave Sim and Gerhard

The above image is from the cover of Cerebus # 99/100, the only issue which contained two full- length stories under one cover.  It was also the only issue to print one of my letters--which read, "Dear Dave, Imagine a particularly stimulating episode of Family Ties where Alex has fled to the moon with Kruschev's frontal lobes."  Not only did Dave Sim publish my letter, his response was "Exactly.  And so...?"

(I could have remembered the letter a bit wrongly... I gave away that issue of Cerebus and many other priceless comics that were in the same box.  But that's another story.)

Furthermore, when I mailed Dave my first self-published effort at the age of 18, Entropy (1990), he sent me a cheque for ten dollars and an encouraging note.  He was a staunch advocate of self-publishing and hated the idea of editors.  Even before the Internet he made his comic book a soapbox for expressing his opinions and interacting with fans in addition to regularly delivering the content everybody came for.

Cerebus was the first comic I ever saw to feature such elegant, black-and-white linework, sometimes stencilled lettering, often with no panel borders, also a wide range of photo-realistic to extreme-cartoony characters interacting with each other on the same page, as well as wide social and political satire mixed with physical gags and nods to other comic books; and last but not least, long story-arcs where you really got to know and love the characters.

I absorbed the drawings but never tried so much to copy them.  It was Dave Sim's writing and sequencing that indelibly effected me.

Oh well, that's it for now.  Does all this stuff about comic books really matter?  Does the Sistine Chapel ceiling really matter?

“What if everything is an illusion and nothing exists?  In that case, I definitely overpaid for my carpet.”
- Woody Allen