SHORT RE-INTERVIEW with Val Peter of "ARTIST UNKNOWN"
This interview happened accidentally over Facebook as a
result of last week's posting. However, Val and Xyle did a long interview
with me for the online documentary channel Artist Unknown back on May 8, 2015
Artist Unknown chats Graphic Novels with Matthew Brown

Val Peter So what do these drawings have to do with Architecture? I'm missing something or I didn't catch something from way back...I figured architecture would be like buildings!

Matthew Brown Yes, indeed! a) The graphic novel explores the creation of worlds, which include the architectural and urban design scales, b) the process of considering the graphics and the discipline of creating them comprises discipline ingrained from the world of architecture, c) the story is about a young man in an alternate world who pines to go to architecture school although he's from the remote provinces, finally gets his wish, and several days later the world ends. He is preserved from the destruction of the world in the mystical city of Varanasi / Benares which is suspended above the universal cycles of cosmic destruction and creation on Shiva's trident, and commissioned to design a new world! smile emoticon

Matthew Brown Val Peter Yup! It's called "Architecture Department," and I had it planned in sketches and notes before I even had the idea of returning to complete my Arch. degree!

Val Peter So the architecture degree is helping you with the whole grasp of perspective in your drawings? Is that the sole incentive or is it moreso for the completion of your degree?

Val Peter You beat me to the punch!

Val Peter I was going to say interview completed after you answered the last Q....lol

Matthew Brown a) Architectural representation has a set of expected drawing conventions, such as the elevation, perspective, section, plan and axonometric/isometric drawings. It also presumes orthogonal (90 degree angles) or something deliberately opposed to it, and includes attempts to portray the experienced quality of a space or succession of spaces. Finally, the drawings are expected to convey a richness of conceptual information... all of these have made their mark! (Pun intended.)


b) My incentives were plural... I wanted to complete what I had begun, follow up my love of comics and investment in doing them, and I wanted to integrate my love of architecture and urban design into my exploration of the human subconscious and its divine/mundane expressions in the graphic novel form.

Val Peter (No question.) So I'm looking forward to seeing some archetypal wonders in your next book!!

Matthew Brown Yes my friend, I PROMISE TO DO MY BEST!!!!!

Posted by Matthew Brown at 16:46 No comments: 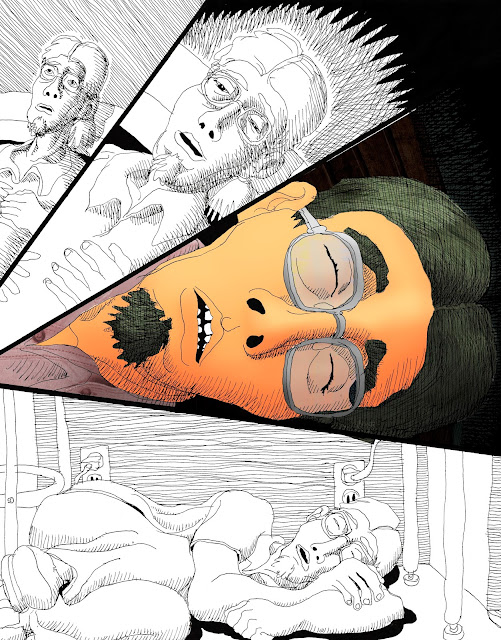 I've been posting the pages in sequence, but today a  jump forward to page 16 to showcase the brilliant work of my fellow student in the Master's of Architecture program at University of Toronto--Mr. Gabriel Valdiviesio.  He graciously showed me his colour virtuosity in Photoshop, when I happened to be working on my black and white scans.

What do you think? 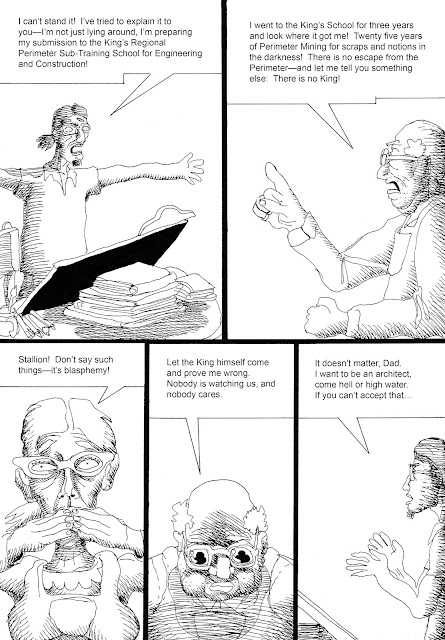 Posted by Matthew Brown at 17:08 No comments: 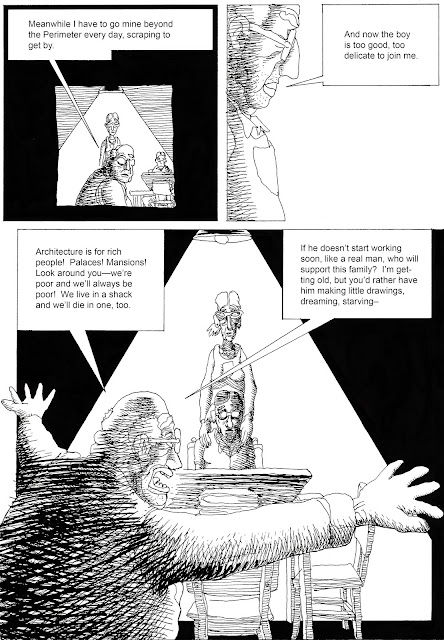 Posted by Matthew Brown at 12:34 No comments: