THE CLIFF - Arriving at the River


Work on THE CLIFF Book 4 - "Heart of Brightness" proceeds... Mutt Blue is about to confront the river Ganga for the first time! 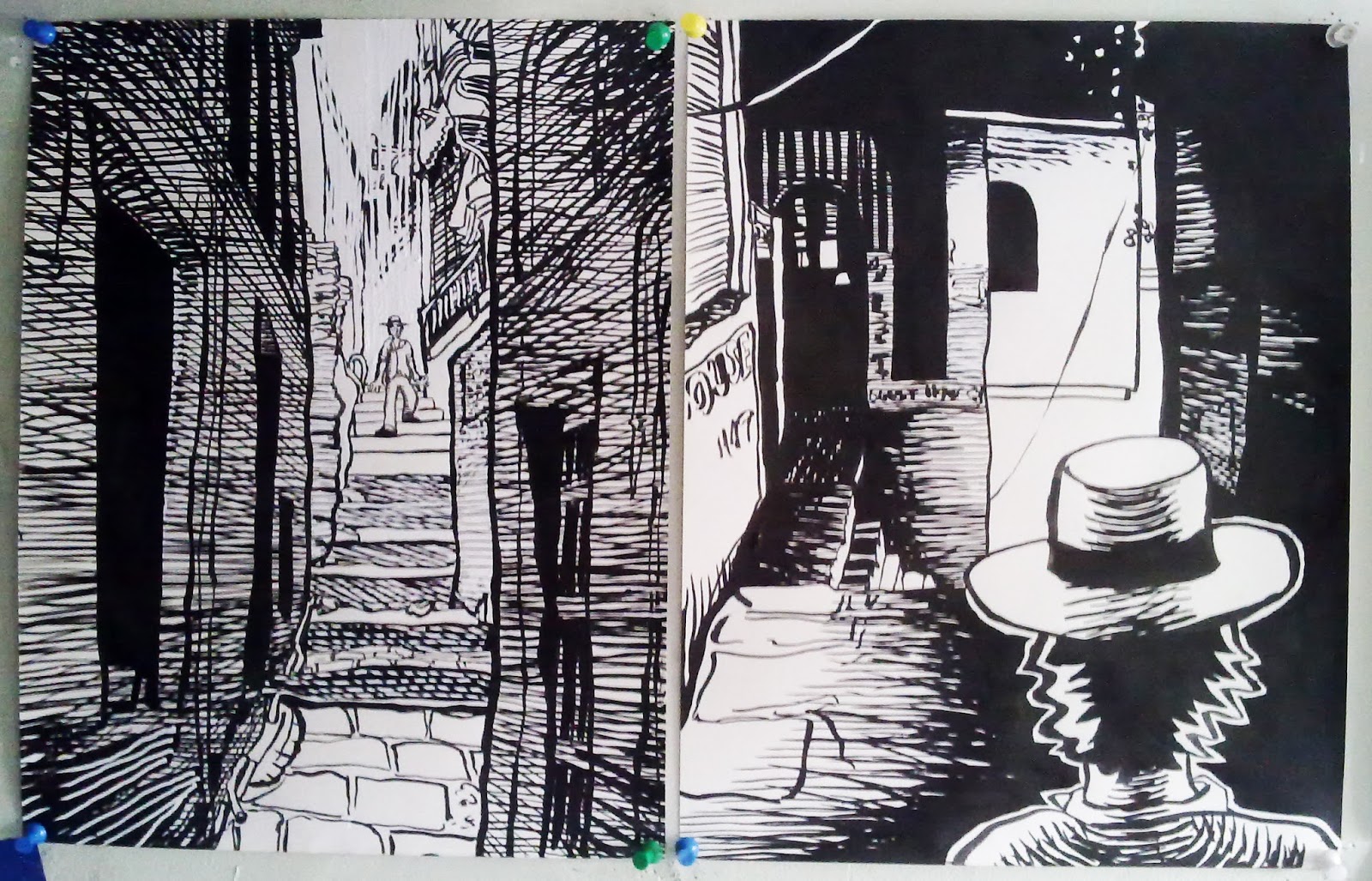 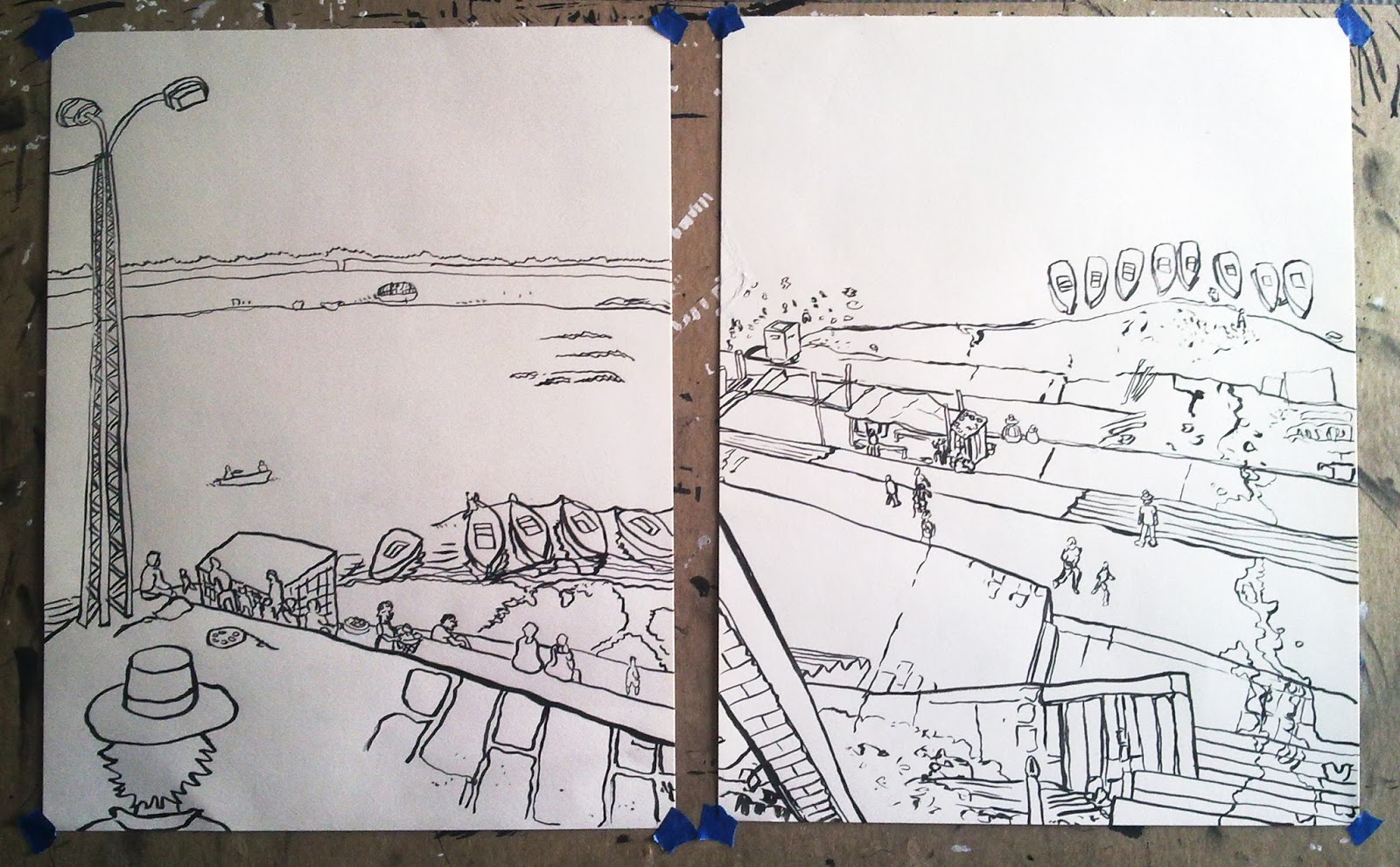 I am just now discovering the beauty of George Herriman's "Krazy Kat" comic strip.  I guess I saw them when I was younger, but it never hit me until now that Herriman is probably the greatest cartoonist who ever lived . (Same with the Velvet Underground in music... but that's another story!)

Here are a few strips from 1920 (courtesy of The Kat Who Walked in Beauty--The Panoramic Dailies of 1920, Derya Ataker Ed., Fantagraphics, 2007) showing that Herriman was also a man of great spiritual wisdom!

(in which phenomena are shown to be malleable and inconstant)

(in which everything is shown to be imaginary--"oh, what a world!")

(in which Krazy's essential nature is shown to be furthest from his own mind...!)
﻿

(in which compassion triumphs, vis-à-vis karma!)
﻿
Posted by Matthew Brown at 08:15 No comments:

The Pig, The Penguin and Mutt Blue have landed in Varanasi!

Fresh off the art table from Book 4 of THE CLIFF--"Heart of Brightness" - pages 21 and 22.
The pig, the penguin and Mutt Blue have landed in Varanasi! 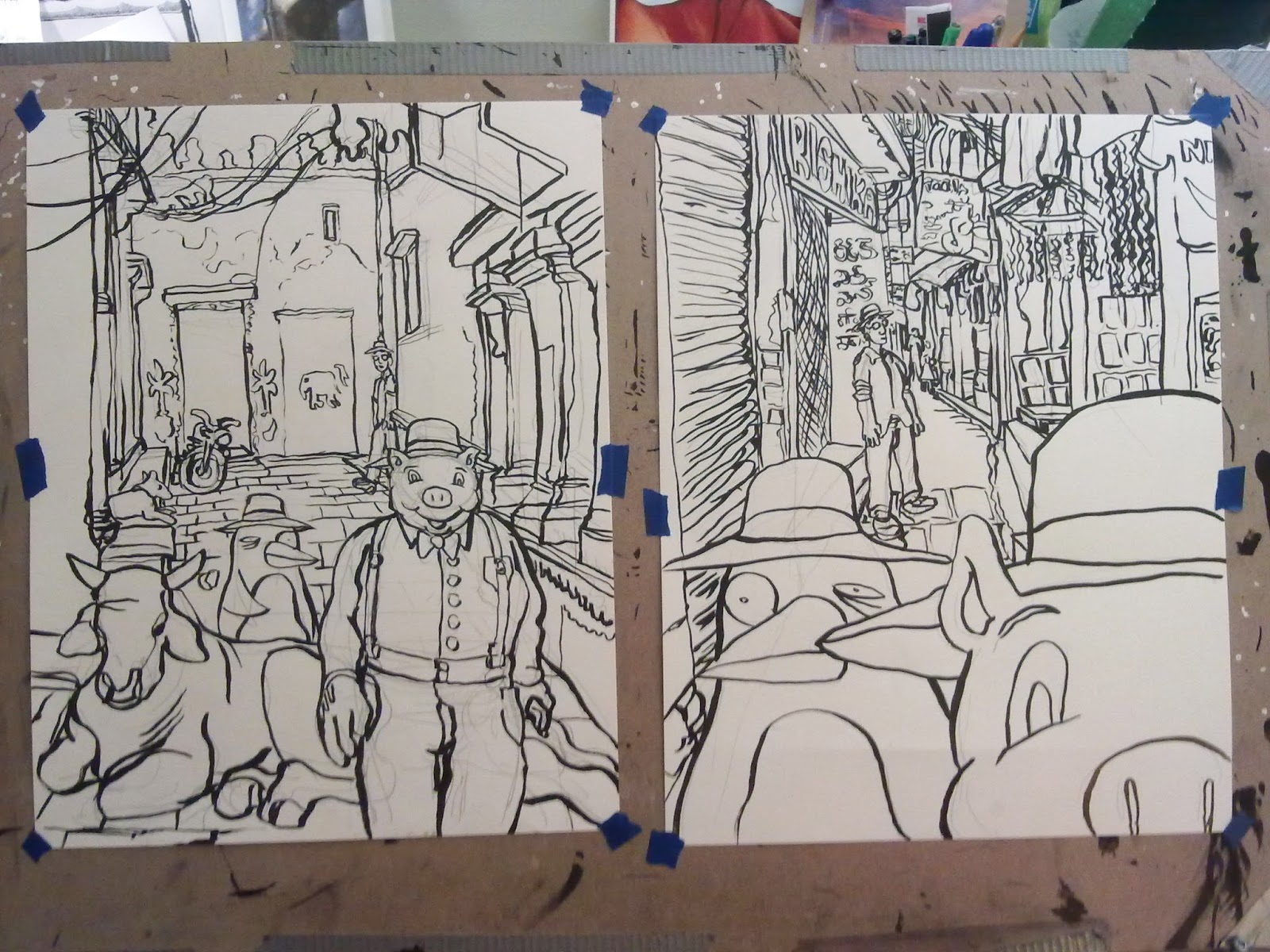 Inked outlines only, before the pencils have been erased 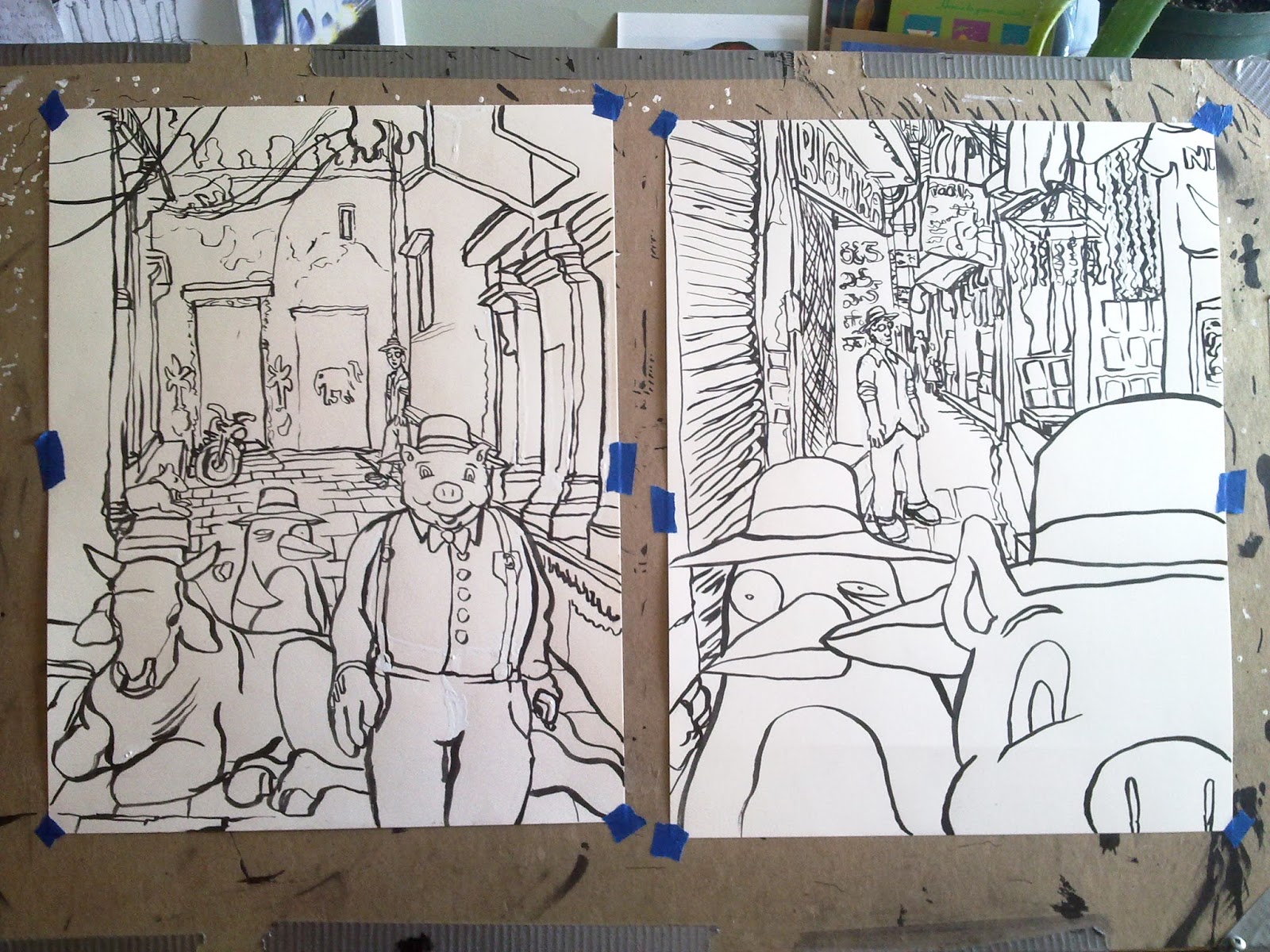 Inked outlines after the pencils have been erased

Posted by Matthew Brown at 08:57 No comments:

A MOMENT OF CEREBUS!

The following article is from a blog celebrating the great graphic novel written and drawn by Dave Sim (and Gerhard) of Canada... Cerebus the Aardvark. It's hard to overestimate the influence of Dave's work on my own approach to comics, and this article says it nicely in a little email "interview" with me.  Thanks, Tim!  Check out his blog, "A Moment of Cerebus," where other comics artists and writers review the influence of Cerebus on their work and lives.

Cerebus: In My Life - Matthew Brown

Matthew Brown is a self-publishing Toronto-based cartoonist. His books The Cliff Vol 1-3 are currently available from Lulu. For more information about The Cliff and Matthew's other projects please visit the Ambient Zero Blog. 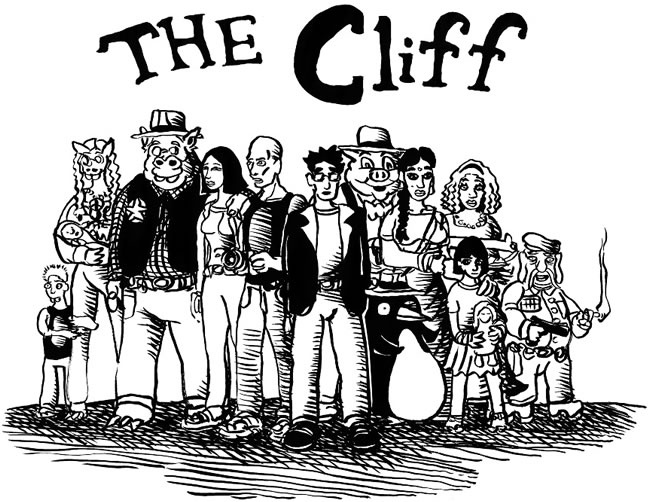 A Moment Of Cerebus:
How did you discover Cerebus and how long did you read it for?

For some reason my grandmother, a PhD in Psychology who knew absolutely nothing about comic books, decided before visiting us to consult the cashier in her local comic book store as to what an 9 year old comic fan (me) might like. She brought Cerebus, I think... #22, "The Death of Elrod" I had never seen a black-and-white comic book drawn in that style and didn't get it, but still had a look through it every now and then and tried to get the jokes. Maybe two years later, when I was in Grade 6 (11 years old,) a classmate had the first Wolveroach issue. Since I was obsessed with Frank Miller's Daredevil and the Wolverine mini-series he was just drawing at that time (written by Chris Claremont,) I got obsessed with having the other 2 Wolveroach issues, despite not quite getting why the Roach was smoking a bundle of toothpicks. My grandmother kindly brought these for me on her next visit from Washington, DC. I read Cerebus from these Wolveroach issues to about just after Cerebus re-awakes holding Jaka's doll and starts slicing up Cirinists after a long coma on a cafe terrace. I bought the next year or two intending to read them at one go, then couldn't sustain my interest in them and let it go (this must be about 10 years later.)

How has your own creativity/comics been influenced by Cerebus?


The timing, for one thing. Dave Sim had a respect and love for the natural cadences of speech, and always gave the story time to unfold around these. Maybe because I also studied Theatre (especially playwriting,) his ear (and hand) for these moments of interchange between characters became a goal for me, too. But Dave's drawings were also much more elegant than anything going on in comics at the time I started reading (1980s,) with fancy borders and lots of empty space for characters to move through. This idea, that comics could be elegant (even if still featuring characters smashing each other over the head or falling down the stairs,) fascinated me. Another feature was having a large cast of characters, all of them with distinctive mannerisms, running the gamut in representation from extremely cartoony and caricature-like (Red Sophia's mother Mrs.Henrot-Gutch, the farmer from the "Wuffa Wuffa Wuffa" issue) to nuanced and naturalistic (Jaka), and naturally co-habiting the same world.

Has Cerebus influenced your approach to working in the comics industry?


Absolutely! When I did my first photocopied, hand-stapled comic book in 1989 or 1990 (Entropy) I mailed Dave a copy. He sent me back a cheque for $10! (The cover price was much lower than that! Even with postage included!) Almost every comic I've done since then has been self-published. I am from Toronto. Along with Chester Brown's first, self-published Yummy Fur, Dave's work set an example for the kind of black and white, self-published comics I wanted to do.
Do you have a favourite scene/sequence from Cerebus?

A few of my favourites:


a) The interchange with Astoria when she is blindfolded and still able to manipulate Cerebus, and they get married and then divorced within the sequence, as well as Cerebus indulging in his "acquired taste" with her, although in a terrible and inhuman manner. Sophisticated Theological Debate: "Tarim!" "Terim!" "TARIM!" "TERIM!" ... and when Astoria asks Cerebus why he quoted her revolutionary line "One less mouth to feed is one less mouth to feed" in one of his speeches from the rooftop as Pope, and he admits he read it on the wall of a latrine. Astoria's response, bound to the wall, but still able to roll her eyes in derision: "Immortality is mine." (Favourite moment in the entire series.)


b) The dream sequences when Cerebus was pope. Amazing Freudian excursions into Cerebus' subconscious, playing with plot foreshadowing and a seamless surreal landscape aided and abetted by Gerhard's beautiful backgrounds.


c) The 2-in-1 issue at the end of Church & State where Cerebus goes into the bar after being told on the moon that he will "die alone, unmourned and unloved," and tells the barman and the arguing patrons who complain, "I just wish that somebody would tell me how it's all going to end" that humans will destroy the world with a solar bomb.


Plus, the only letter I ever had printed was printed in that issue! Which I gave away, along with many of my other priceless comics, to a Zen Buddhist Temple garage sale.

At the time it was an experiment in emptiness, but now, just feels... empty!

Would you recommend others read Cerebus, and if so why?


I would recommend that anyone with a very flexible mind read Cerebus, because it's a tough job to follow Dave Sim through parody, satire, slapstick, political and cultural commentary, literate ambitions and emotional/psychological drama, as well as numerous references to fandom and comic books from the 1970s to the present, and a tolerance for meandering plotlines... but a LOVE FOR GENIUS!