Comics are a kind language; I know for sure that some people just don't "get" them.  Like ballet, or poetry, if you didn't grow up reading comics it can be pretty hard to pick one up and get anything out of it when you're "grown up."
This is even true across cultures... my wife, who grew up reading Japanese manga-style comic books, doesn't enjoy North American-style comic books.

Charlie Brown, from Charles Schulz's "Peanuts...
what I grew up with Conan the Detective, by Gosho Aoyama...
what my wife grew up with.


(As to the amazing potential of the visual language of comic books, Scott McLoud said it all and more in Understanding Comics, and so did Will Eisner in Comics & Sequential Art: Principles & Practice of the World's Most Popular Art Form!)

At any rate I was fortunately exposed to great comics from a young age, mostly via a comic-geek high school student of my father's who gave us stacks of dog-eared and yellowing Archie, Dennis the Menace and Silver-age Marvel Comics reprints like Spiderman, The Fantastic Four, X-Men and also Superman.

There was my dad's old stack of MAD Magazine from the late 1950's to the early 60's.  I especially loved the spoofs in them where it looked like Charlie Brown, Snoopy, Lucy, Nancy, Bumstead, Superman and other familiar comic strip heroes were doing and saying things they weren't supposed to.

But I still had to figure the language of comics out for myself; and I spent many hours immersed in these fascinating pictures and stories.  Two particular images I remember now were particularly confounding.  I just never "got" them until much, much later...

When I was six years old I could not make any sense of the above drawing of Princess Leia.  Was it one face, or two faces?  The reason being that one half of her face was pink and the other was blue!  I found it very disturbing.

Fortunately at that age I didn't have to confront Picasso's Cubism... 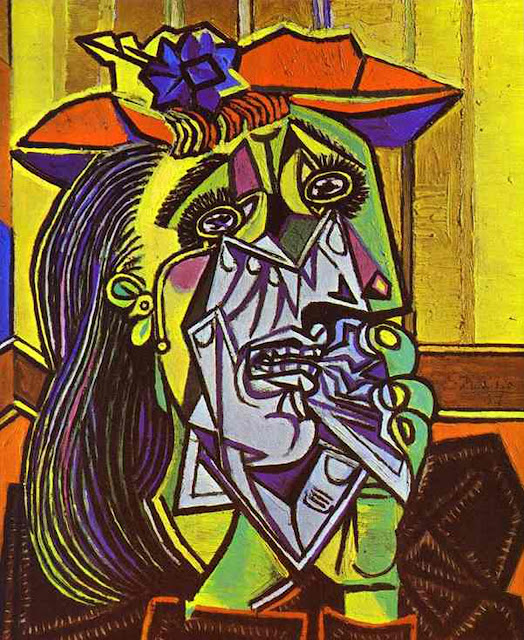 ... which by now has been sequed into comix language by geniuses such as Art Spiegelman. 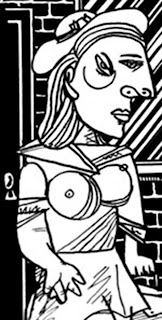 But the comics panel below, which I encountered when I was eleven, really bothered me...

I first saw Frank Miller's reimagination of Daredevil at the corner store in the early 1980's, but with Ronin he galloped over the traces and challenged everything possible about what North American mainstream comics could be.  For me Ronin  was, and still is Frank Miller and North American comics' most exciting masterpiece.

What bothered me about the panel above though at the age of eleven was the waiter carrying the tray with the drinks in the middle of the panel, on the left-hand side.  Look at his chest!  It goes in a straight line down from his collar.  That was not how chests were supposed to look...  and the rest of him was weirdly squared-off, like the pixellated computer game graphics at that time...

Space Invaders, the first and last video
game I was ever good at

I just could not wrap my head around what had gotten into Frank Miller when he drew that waiter who looked like a cardboard cutout.  Did Frank get lazy?  But if so, why did the rest of the comic look so awesome?

Of course now I realize that he was experimenting with stylization; borrowing the flattening and patterning techniques of say, Henri Matisse... It was a good challenge to my assumptions that these artists experimented with the graphic conventions of comic books.  I'm glad they were restless, and I'm glad I was disturbed.  We're all the richer for it.

On a related note about the potential of comics to communicate in their unique words/graphics combo, here is an article about using comics to teach doctors, shared with me by my friend Janet Glasspool!

http://www.thestar.com/news/gta/article/1231183--comic-books-have-something-to-teach-future-doctors
Posted by Matthew Brown at 07:10