WHAT IS MEDITATION? reviewed on 'Shelf Abuse dot com'!

Thanks Carl Doherty for this great review!  Honest and articulate, as always. Link and review follow: 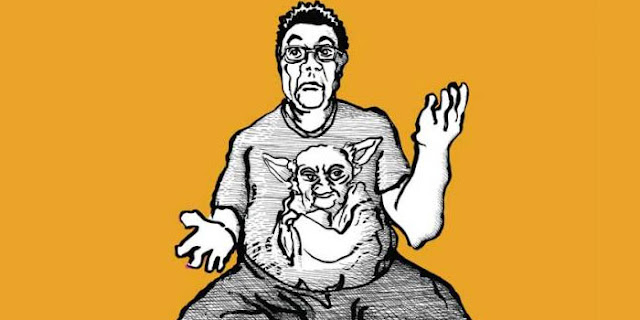 ‘WHAT IS
MEDITATION? AND WHY SHOULD I DO IT?’ REVIEW
AUGUST 27, 2018 CARL DOHERTY
2018, Trip Comix
Written and illustrated by Matthew Brown
For his latest graphic novel, What Is Meditation?, Matthew Brown mixes the autobiographical with illustrated transcripts for an intimate reflection on meditation that’s unlike anything else I’ve read.
This should come as no surprise to anyone who’s experienced Brown’s previous efforts, The Cliff and Architecture Department. The former was an existential odyssey that took thirteen years to complete and traversed a variety of art and storytelling approaches. The latter was Brown’s master’s thesis in architecture told in comic form, and was extremely inventive if (by its very nature) ultimately confounding.
What Is Meditation? And Why Should I Do It? - Matthew BrownWhat Is Meditation? And Why Should I Do It? is a similarly novel combination of three comics; one detailing Brown’s relationship with meditation and two illustrated interviews with teachers of the practice. These are followed by additional personal notes and full transcripts of the conversations, and there’s also a warm introduction by the legendary Chester Brown.
The autobiographical frame story is a joy, as Brown touches upon his life’s travels and relationships with Buddha, Ramana Maharshi, Lao Tzu and Nisargadatta Maharaj with a lightness that never veers towards the didactic or condescending.
As a “critical bastard” (a friend’s words, not mine) who is sceptical of anything spiritual, I found the first interview, with Edward “Edji” Muzika, rather insubstantial, his thoughts on awareness and enlightenment too egocentric and paradoxical to convert a non-subscriber. The interview with Frederick Prack, however, makes for some truly insightful discourse. Prack’s philosophy on identity, mind models and what it means to be conscious could benefit even the most materialistic and grounded of beings.

I like Brown’s work a lot. His artwork isn’t immediately appealing, in that it’s not especially sophisticated or charming, but there’s an endless creativity here, an earnestness that makes his three graphic novels stand out from the pack. His dense imagery and naturalistic approach to narrative draw you in, and he’s not afraid to apply the comic book structure in bold new ways. His storytelling here is more confident than those earlier efforts, too, particularly in the playful frame story.

Due to its introspective nature, What Is Meditation? And Why Should I Do It? doesn’t reallyanswer its own title, but Matthew Brown’s journey through his practice proves an authentic and engaging oddity.
Posted by Matthew Brown at 08:06